Results plotted at the bottom (extra credit problems there too!). Does anybody have a real model of M(.) and F(.) we could try this on (as explained in Nick's post)? Let me know!

Jesse (in Nick's comments) does a great job of explaining in an intuitive way why both m and f need to be solved for and adjusted simultaneously. He makes use of a water control problem with two knobs to fiddle with and two desired outputs (temperature and flow rate). Here's a quote:

"This works well if you know the gains (or elastisities reasonably well) and the same system controls both outputs (c and h) and has responsibility for both measured variables (T and F in this case). You also have to control both synthetic variables simultaneously for it to work."
My comments there (beneath Jesse's) and here describe the same thing, except right from the start I assumed we didn't "know the gains" well, and would have to estimate them. What I describe here and show a working example of is a kind of blind estimator, where pretty much all I've assumed is that the system I'm trying to control can be approximated as linear near a nominal operating point, and is reasonably static enough that I can estimate it before it significantly changes. If you're more than happy with Jessie's explanation, I doubt this will do much for you: this is for the extreme nerd... so proceed with caution! Really the only reason I went to so much trouble here was it seemed I couldn't quite get it right in the comments on Nick's blog... and so I started to wonder, what is exactly the "right" approach here. I wanted to make sure what I was talking about could be done, and that I really understood how to do it. At this point, this probably has little to do with Nick's point, and doesn't add much beyond what Jesse already covered. Still though... it does provide a platform to test any of Nick's hypothesis should he do any more conjecturing on this particular set up (though I have a feeling he's finished with this topic).


The basic idea of the simulation that I present here (source code below) is to set up an arbitrary (random) problem like Nick describes and solve it iteratively with a blind search algorithm. Most of the problem is randomly created: the user just picks the problem dimensions under the first block of code under the comment line "control parameters": Nv = length of V, Nm = length of Um, Nf = length of Uf, and Rv = a measurement noise covariance (be sure to pick one that's positive definite!... for example Rv = sqrtRv*sqrtRv' works when sqrtRv = rand(2,2)). Niter is the number of time steps, and Nls_xtra is how many additional time steps worth of data is collected (above the minimum) before the first estimates of the system matrices are made (the system matrices are A and b, and they are randomly selected before the time iterations begin). A is dimension 2x(2+Nv+Nm+Nf), b is 2x1. I put Nick's control variables in x1: x1(1) = m and x1(2) = f. While x2 consists of the vector [V' Um' Uf']'. An initial guess for x1 is made (randomly) and the vector x2 is a random function of time. I also add in measurement noise v with covariance Rv. I assume I can see "shocks" V, Um, and Uf perfectly. The basic idea is it's a 1st order blind search algorithm, in which I assume a linear (really affine) structure to the underlying functions M(.) and F(.). Note that y = [M F]' is my output (note that a single quote ' denotes transpose, in all that follows: thus y is 2x1). The system looks like this:

Where x = [x1' x2']'. The objective is to minimize the magnitude of the error vector, which is the difference between between the desired output, ystart = [M* F*]', and the actual output, y = [M F]'. ystar is selected randomly before the time iterations begin.

Essentially the 1st row of the above system equation is an affine approximation of the function M(.), and the second row is an affine approximation of F(.), but I have no knowledge of the parameters of either apriori (other than a few elements of A that I know are zero based on Nick's description: essentially M is not a function of Uf, and likewise F is not a function of Um). Also, my measurements are corrupted by additive white noise v (I discuss why I added this noise later).

My strategy is to continuously refine a least squares estimate of A and b, and use those estimates to then select x1 so as to minimize the power of the error vector, z. I also calculate a history of true errors Z to plot:

This all sounds more complicated than it is. Really I can summarize the algorithm in just three simple steps, to be repeated for each time iteration:

I believe this basic approach will work even if the underlying system is not perfectly static and not perfectly linear, but I'd probably need to update my least squares estimation to fade the old data away, and weight the newer data more heavily for it to work acceptably well under those circumstances. That weighting would be a tuning parameter (a fading parameter for old data). If there are too many dynamics or too much non-linearity it will almost certainly cause the solver to fail though, regardless of how any tuning parameters are set. The way it's programmed now, the truth system is perfectly static and linear, and all measurements are given equal weight by the system estimator. I have some "extra credit" questions at the bottom of this page addressing this.

This is a very general type of solver, and it would be interesting to see if it can be tuned to work on a realistic system of M(.) and F(.) (maybe like Nick imagines), with realistic V, Um, and Uf "shock" vector functions.

Nick describes in his post a procedure for minimizing the error in first M and then F (by twiddling first m only, and then f only, or vice versa), as if these steps could be taken independently. I don't believe this will work very well since M and F are explicitly coupled together, and thus m and f must be selected at the same time: it's a simultaneous system of equations. Maybe I'll try to dream up an example where solving first one then the other never converges. 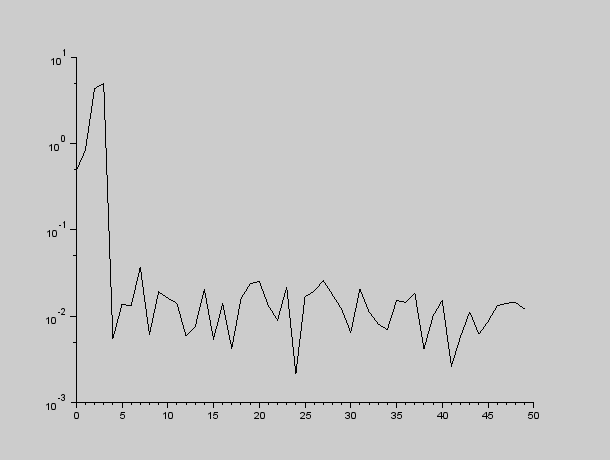